How Bitcoin Can Help Developing Countries 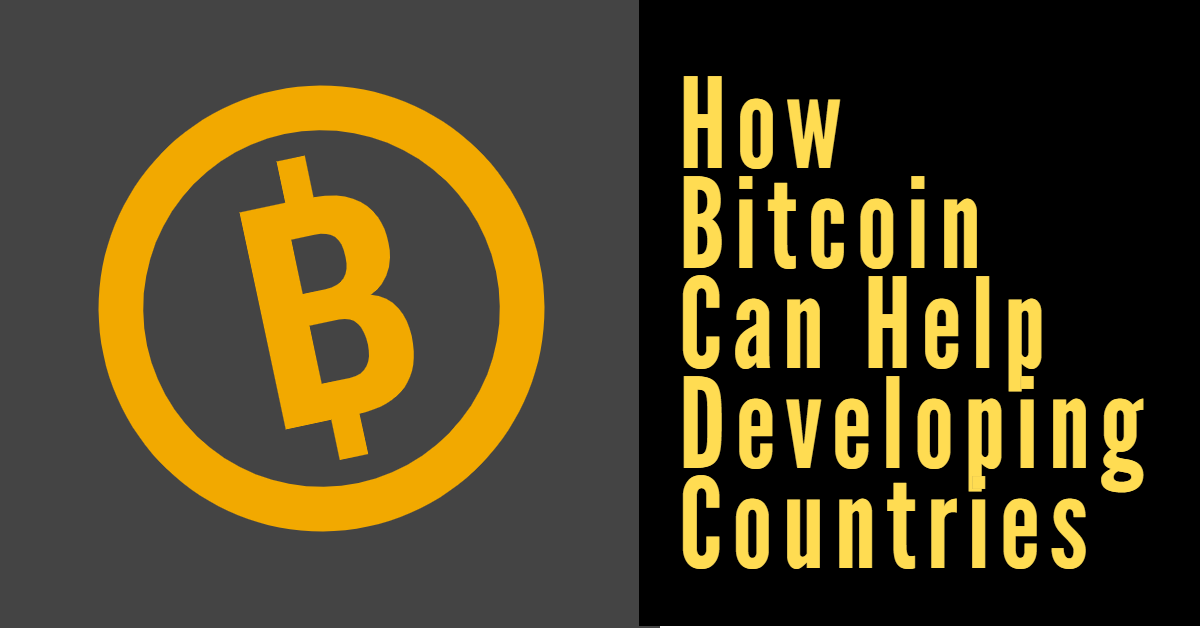 Many people living on less than a dollar a day cannot afford the insurance they offer; in India, for example, only 15% of the population has health insurance. Even then, they pay a much higher relative premium than in advanced economies.

In order to pay for products, they must have a strong and stable currency that is easy to use and payments can be made immediately. Bitcoin, on the other hand, is not easy to handle, not as stable in value as other currencies, and not fast enough to make transactions remotely.

For African nations, cryptocurrencies solve another economic problem: cross-border payments. According to the World Bank, countries in Sub-Saharan Africa have some of the most expensive LMICs in the world (low- and middle-income countries), where sending money abroad costs an average of $94 to $200 per transaction. Heavy transaction fees and long transfer times limit the expansion of the growing continental population. For small and medium-sized enterprises, the exchange of so-called fiat currencies for another country’s official government currency can choke off growth.

When Bitcoin is used, fees are reduced to less than 3%, and clearing funds can be a matter of hours or even minutes. With the help of Bitcoin, companies reduce fees and shorten transfer times for sending and receiving foreign currencies. BitPesa facilitates currency transactions in seven African countries: Ghana, Kenya, Nigeria, Senegal, Tanzania, Uganda, and the Democratic Republic of Congo. Abba Pius, CEO of Spirited Frontier Trading in Lagos, Nigeria, says shortening remittance times reduces anxiety for businesses and customers dealing with international payments.

With continued technological advances, digital currencies are a model for helping developing countries. Cryptocurrencies have the ability to solve problems that only occur in developing countries, improve access to financial services for growing economies, promote transparency, and reduce corruption. They also reduce transaction times and costs, enabling greater microfinance and financial inclusion. The popularity of blockchain technology, cryptocurrencies, and digital currencies has continued to rise but has experienced bumps along the way. Many are reluctant to accept Bitcoin and other digital currencies because of their anonymity and fluctuating market value.

The creation and digitization of new currencies that are not owned by governments or people has found itself in the global market over the last decade, starting with Bitcoin (BTC) and exploding into thousands of alternative digital currencies available on exchanges with a total valuation of more than $285 billion, each with its own form of value and use. When it comes to developing countries, especially Africa, the revolution that leads people to financial independence and inclusion, we begin with the eye-opening reality that African users are leapfrogging developing countries in the use of technology, with mobile phones being African primary tools of choice for businesses, daily life, and exchanges in terms of their use and adoption of cryptocurrencies.

Cryptocurrencies have been discussed and discussed ever since they became known as a financial instrument that is accessible and useful not only to die-hard connoisseurs. They have the potential to facilitate social and economic growth worldwide, including in developing countries, by providing easy access to capital and financial services. Cryptocurrencies, and Bitcoin in particular, have a utilitarian and disruptive quality that is beginning to disrupt the functioning of the traditional financial system. There is a whole industry around cryptocurrencies, and it is held by institutions dedicated to monitoring the digital coin exchanges taking place around the world.

Encouraging people to own assets is one way to combat income inequality in the US, but developing countries need a different game plan. Bitcoin is already accepted in the real estate market, where investors can own part of a building if they can’t afford the entire unit, CNBC reports. This new business model opens up the possibility of owning property across international borders. It can also help to distribute wealth by increasing investor demographics.

With more people worldwide owning smartphones than ever before, Bitcoin has the potential to reach more users in the 2020s. In cryptocurrency transfers, a basic Internet connection can help to access and trade cryptocurrencies.

Cryptocurrencies can revolutionize the way traditional currencies are used in developing countries. It offers a coherent single currency that is reliable and has value for everyone who uses it. It keeps costs transparent for individuals and, if used sufficiently, has the potential to become the primary currency of Third World countries. The only problem is that no developing country is currently prepared to adopt cryptocurrencies. Bitcoin developers have developed several small fixes and workarounds for how to introduce Bitcoin as the primary currency for developing countries, but scalability is still a devastating issue and fees can become astronomical.

This is not to say that cryptocurrencies only work for the poor. That’s what Bill Gates said. He even went so far as to say that some countries could use digital currencies. But there are other reasons why Bitcoin might not work in some countries.

There seems to be a general idea that Bitcoin can be beneficial to low-income people. As mentioned above, families can benefit from the lack of fees associated with cryptocurrencies. Digital currencies and access to them are better for the resources of poor countries.

Consider Haiti, a country where workers abroad send money to their families, equivalent to 26% of Haiti’s GDP, or $1.5 billion. Workers in the United States can transfer dollars or bitcoins to their families at home and withdraw them in pesos.

Although there are competitors in the cross-border money transfer market, one stands out. This is a cryptocurrency application that can reduce transaction costs by up to 90 percent. In its system, money is transferred via Bitcoin and sent via a digital blockchain to the recipient, where it is transferred in local currency. The entire transaction takes place immediately, and the customer witnesses the Bitcoin transaction.

Apps such as Coinbase allow people to buy and sell digital currencies such as Bitcoin. They also offer free digital wallets to save your currency. With Coinbase, all you need is a phone and a credit/debit card to start buying.

Millions of people in developing countries are living with the harsh reality of inflation. A good example is Venezuela, where the national currency is almost worthless due to hyperinflation caused by an ongoing socio-economic and political crisis and poor macroeconomic policies.